Showing posts from August, 2007
Show All

August 08, 2007
1) When I Covered My Head, I Opened My Mind As a non-Muslim living in Western society, the idea of modesty was not exactly foremost in my mind. Like all other women of my generation and mind-set, I thought such ideas were antiquated and excessive. I felt pity for the poor Muslim woman who had to "wear all that junk," or "walk around in bed - sheets" as I used to call it I was a modern woman, educated and liberated. Little did I know the awful truth. I was more oppressed than any Muslim woman in the most culturally oppressive village in the Muslim world. I was oppressed not by an inability to choose my clothing or to choose my life-style, I was oppressed by an inability to see my society for what it really was. I was oppressed by the idea that a woman's beauty was public, and that lustful admiration was equal to respect. It was when Allah guided me to Islam, and I put on the hijab, that I was finally able
Post a Comment
Read more
More posts

Muslimah By Design
Taskeen believes in living with intention and purpose to fulfill our ultimate goal of attaining Paradise. She is passionate about mindfulness and living life fully (food, travel, islam being her favourite topics!) She blogs about ways to enhance her faith, life, travels, parenting, health, body and mind, and cooking! 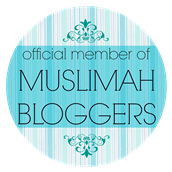